Connect to your local community!

Find a Job or Staff Your Team

Built To Spill
Attending Interested
718area has new update 13 hours ago Giants news, 5/17: OTAs Day 1, Joe Judge, more
Geoff Burke-USA TODAY Sports New York Giants headlines for Tuesday Good morning, New York Giants fans! Practice Report: Giants kick off OTA season Wide receiver Collin Johnson stood out, and Shane Lemieux made his return to the practice field. Biggest questions facing each new NFL offensive play caller in 2022 How much do the Giants use Daniel Jones, the runner? During Daboll’s time as the Bills’ play caller, their most efficient and explosive run game came off designed quarterback run concepts for Josh Allen, using his athleticism to get to the outside or his excellent size as a battering ram between the tackles. Jones is several tiers below Allen as a player, but he does have size and speed in spades — especially when he can keep his feet. Using Jones as a designed runner can help raise his floor as a player, and pairing him with a potentially healthy Saquon Barkley could lead to fun play design opportunities for the creative Daboll. This would also help a rebuilding Giants offense stay on schedule more frequently. Joe Judge may call plays in new role with Patriots Well, the Pats are known for being good at quarterback sneaks. How the Jets’ and Giants’ game-changing 2022 NFL Draft classes could set the teams on a new course How New York Giants Joe Schoen and Brian Daboll Are Redefining the “Giants Way” Giants Rookies Who Will Make Instant Impact in 2022 Season Predicting which Giants rookies will make biggest impact in 2022, from Kayvon Thibodeaux, Evan Neal to UDFAs Kayvon Thibodeaux’s JREAM foundation will be providing opportunities for students to attend Core Prep Academy Football, a program that partners with private middle schools to provide a student athlete focused curriculum. pic.twitter.com/gymW5CSDXq— TheJreamFoundation (@TheJreamFound) May 16, 2022 In case you missed it Austin Allen one of intriguing tight end options for Giants Offseason grades: PFF gives Giants a B- Around SB Nation: What other NFL blogs are discussing Giants’ 90-man roster: “Underutilized” TE Daniel Bellinger Day 3 find? BBV podcast You can find and subscribe to Big Blue View radio from the show’s home page. You can find all the shows on our Big Blue View Radio Hub Page. You can also find the shows and subscribe on all your favorite podcast apps: Apple Podcasts | Google Podcasts | Pocket Casts | Spotify | Stitcher | RSS BBV social platforms BBV on Twitter | BBV on Facebook | BBV on Instagram | BBV Radio (available on all of your favorite podcast platforms) | BBV on YouTube BBV mailbag Have a Giants-related question? E-mail it to bigblueview@gmail.com and it might be featured in our weekly mailbag. 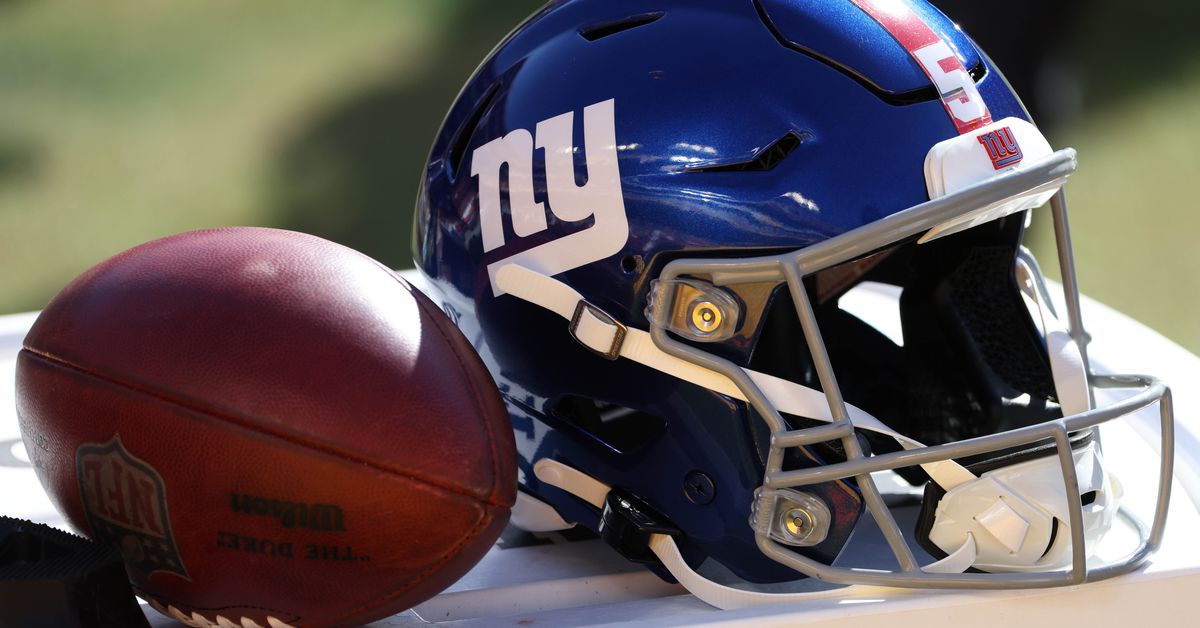 718area has new update 13 hours ago New York Jets Flight Connections 5/17/22
Photo by Jim McIsaac/Getty Images Bringing your daily links to the NFL’s New York Jets Good morning, Gang Green Nation. I hope you’re all having a great start to the day. As we get closer to minicamp and OTA activities, it’s important to keep a level head about some of the newest members of the Jets, including the rookies and UDFAs acquired by the team. We’ve seen in the past how preseason hype can lead to unreasonable expectations of players. On top of that, we’ve seen some of Jets fans’ favorite preseason players get hyped, then not even make the roster. It’s also important to remind yourself that this is only the offseason. Seasons aren’t decided during this time - outside of freak injuries to key players - and unless players are underperforming at an incredible rate, it shouldn’t affect your thoughts on veteran players potentially producing during the season. The NFL is a game of attrition, as we’re all aware, so let’s hope the Jets don’t have to face unreasonable burdens going into the season with injuries and other circumstances. With that, here are your links to the team to start your morning. Jack Bell - 7 Things to Know About Jets’ 2022 Schedule David Wyatt-Hupton - 10 Things the Jets Need to Make the Playoffs Kambui Bomani - How the Jets' and Giants' game-changing 2022 NFL Draft classes could set the teams on a new course Nathan Smith - Ranking the 10 most important players to the future of the NY Jets Rich Cimini - New York Jets' Zach Wilson uses offseason to build body and chemistry Jack Bell - Jets Notebook | TE C.J. Uzomah Says QB Zach Wilson ‘Is Talented as Hell’ Michael Nania - This dominant D.J. Reed game showed how good he can be | NY Jets Film Neil Dutton - Will Jeremy Ruckert Take Off With the Jets in 2022? Ethan Greenberg - Jets Sign First-Round Pick Jermaine Johnson Michael Nania - NY Jets RB Breece Hall spotted rocking a new jersey number Ryan Moran - Does NY Jets UDFA Zonovan Knight have a chance to make the roster? Tyler Calvaruso - New York Jets: Things to know about new OL Derrick Kelly Michael Golden - Looking back on the career of former NY Jets RB Bilal Powell Justin Fried - 7 former NY Jets draft picks fighting for a roster spot this summer NewYorkJets.com - Gregg Knapp Selected as One of PFWA's 2022 Paul 'Dr. Z' Zimmerman Award Winners Here are your missed connections from yesterday. I hope you all have a safe and wonderful rest of the day. 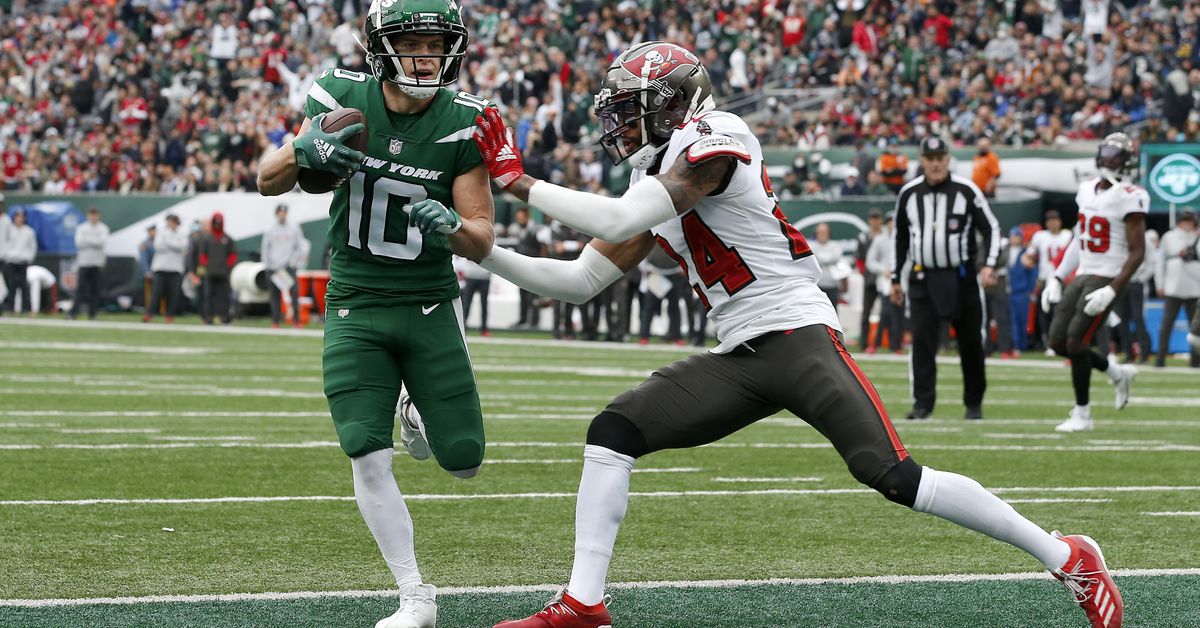 718area has new update 14 hours ago Today on Pinstripe Alley - 5/17/22
Photo by Patrick Smith/Getty Images The Yankees aim to continue flipping the script on their early-season woes at Camden Yards. Last night was the kind of win in Baltimore that seemed to elude the Yankees far too often in 2021. I know that I reference that team a ton, but hell if that group didn’t also find numerous ways to stick in my craw. Multiple homers! Insurance runs! What a concept. I love to see it, and hopefully it continues tonight against whatever a “Spenser Watkins” is. Today on the site, Dan will review how the Yankees’ farm teams fared over the past week, Josh will recap the rivals’ results from Monday night, and Sam will consider the possibility of good signs indicating even more future production from Josh Donaldson. Later on, Jake will take a temperature check of the Yankees’ numbers by comparing them to the positives & negatives from the first quarter of last season, new staff writer Chris will compare Marwin Gonzalez to Tyler Wade, and Jesse will muse on the transcendent talent of one Aaron Judge. I’ll also present the results of last week’s SB Nation Reacts survey. Today’s Matchup: New York Yankees at Baltimore Orioles Time: 7:05 p.m. EST Streaming: YES, MASN Radio: 1280 WADO, 660/101.9 FM WFAN Venue: Oriole Park at Camden Yards Fun Questions: 1. Two notable Yankees have yet to go deep in 2022: Isiah Kiner-Falefa and Kyle Higashioka. Who launches dinger No. 1 first? 2. Predict the outcome of the upcoming Rangers/Hurricanes Stanley Cup Playoff series. 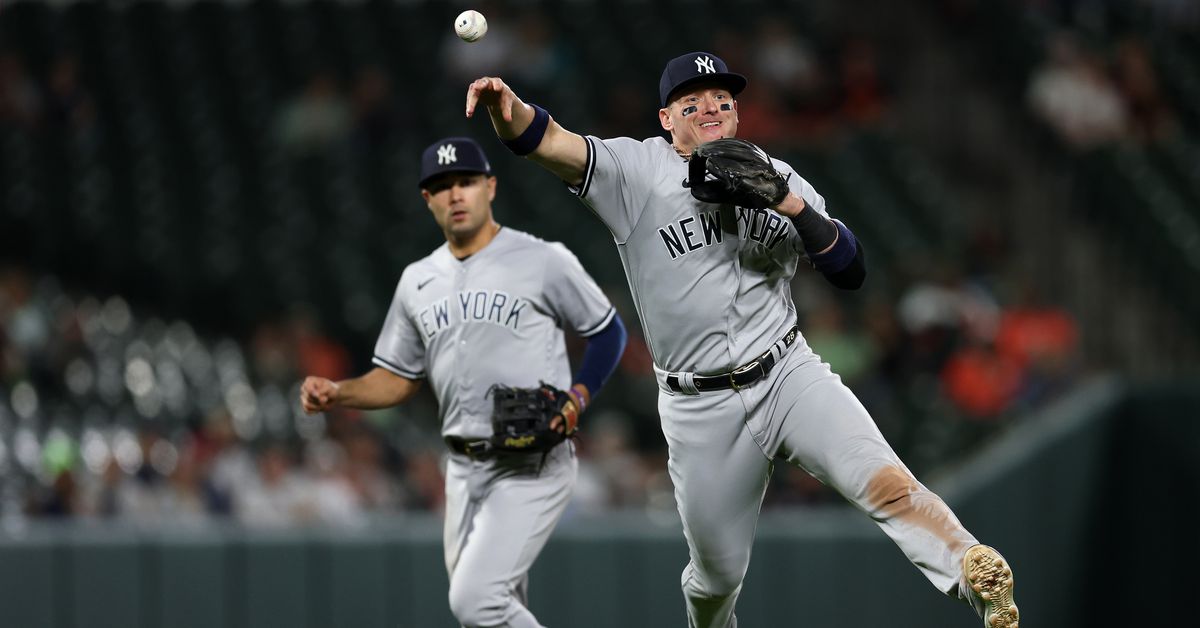 718area has new update 15 hours ago NYY News: Five guys, four positions, first place
Photo by David Banks/Getty Images The infield scramble is paying dividends; Holmes the man in the bullpen; Update on Ben Rortvedt and others; breakout spring from pitching prospect New York Post | Dan Martin: It felt like, back in April, the Yankees had too many men for too few roster spots. This seemed to be especially true in the infield, where five players were capable of starting at four positions, but almost a quarter of the way through the season, that seems to be just the right number. Manager Aaron Boone has done an excellent job rotating players in and out of the lineup while keeping everyone both productive and — so far — healthy. New York Daily News | Kristie Ackert: The title of “Best Yankees Reliever” might bounce around on a weekly or even daily basis, but right now, it’s Clay Holmes, the right-hander with a 752 ERA+ (!!!). It’s particularly telling about his role with the Yankees that, before Joey Gallo gave the Yankees a little insurance on Sunday afternoon, Boone was ready to bring Holmes in for the save in a two-run game. Regardless of whether the Yankees rely on a true closer or not for the rest of the season, Holmes will be a huge part of the relief strategy. NJ.com | Brendan Kuty: Where in the world is Ben Rortvedt? The catcher who came along in the spring trade with the Minnesota Twins has yet to suit up for the Yankees, battling a pair of injuries to start the year. The latest, described simply as a “bum knee,” may require surgery, furthering the time the lefty hitter will be on the shelf. Yahoo! Sports | Mike Ashmore: Will Warren didn’t really make a splash in the eyes of scouts until he was a junior at Southeastern Louisiana, and now finds himself on a potential fast track through the Yankees’ minor league system. With 34 strikeouts in 25.1 innings for High-A Hudson Valley, the eighth-round pick from the 2021 draft appears primed for a promotion to Double-A Somerset, and Ashmore does a great job of delving into the physical and mental adjustments that Warren has made as he’s turned into a bona fide prospect. 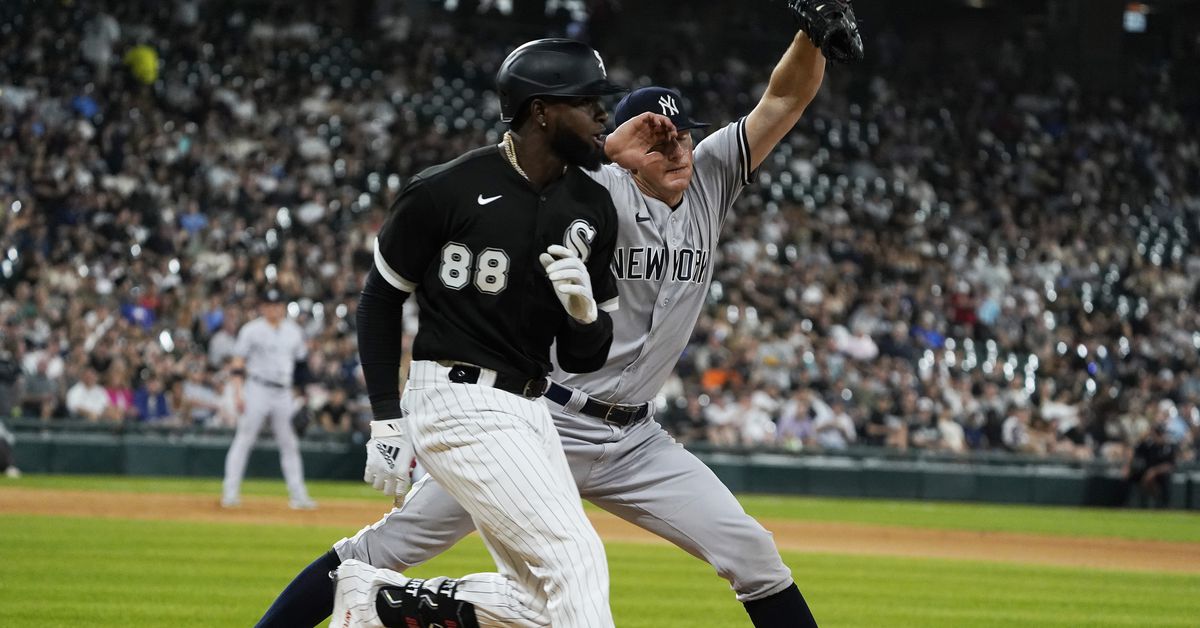